In my previous post, I described ordering the new Google Glass frames for prescription lenses and what the doctor experience was like. This is a follow up to that . . . actually getting and using the frames. I had a lot less questions in just picking up my frames with my new bifocal lenses. The doctor's staff was helpful and curious about them and fitted them to my face just like non-Glass frames.

The technicians had to adjust the nose piece/bridge so the prism was properly positioned just above my eye. I am fussy, so they let me attach my Glass to the new frames because I wanted to, but they were fully schooled in how to do it. I have to say, if you are in the San Gabriel Valley area of Los Angeles county you should check out Dr. Bettelheim, he and his colleagues at Arrow Vision Center run a great shop for non-Glass and non-Glass vision health.

I got the new frames last week, but wanted to use them a bit before I posted again, to see how I liked them. As with all new glasses I have received in my life (glasses wearer since 3rd grade!), it took a few hours to get used to the slight difference in prescription and frame size, but after that they "disappeared" from my conscious mind like all good glasses should. Having Glass with lenses was great because now they felt more natural and I have worn Glass more as a result.

On the US President's Day holiday, I went beer-tasting and had a good time shooting photos and keeping informed without feeling I had this device on my head. It is just my regular glasses, enhanced!

Another benefit is the more comfortable fit while bike-riding. I need a helmet riding and being able to wear regular frames + Glass is more natural. If you want to see what it is like, check out the video I made of the Claremont Thompson Creek Trail with Glass. I can ride and see and record with ease. All-in-all the prescriptions frames are the best accessory for Glass and will allow me to use it much more often.

Posted by Scott Lawrence Lawson at 7:14 AM No comments: Links to this post


Along with AOL, Facebook, Google, Facebook, LinkedIn, Twitter, and Yahoo!, I support the national effort to fight back against the NSA mass surveillance of citizens of the US and of the world.

Here are the principles of the movement:

1. Limiting Governments’ Authority to Collect Users’ Information
Governments should codify sensible limitations on their ability to compel service providers to disclose user data that balance their need for the data in limited circumstances, users’ reasonable privacy interests, and the impact on trust in the Internet. In addition, governments should limit surveillance to specific, known users for lawful purposes, and should not undertake bulk data collection of Internet communications.

2. Oversight and Accountability
Intelligence agencies seeking to collect or compel the production of information should do so under a clear legal framework in which executive powers are subject to strong checks and balances. Reviewing courts should be independent and include an adversarial process, and governments should allow important rulings of law to be made public in a timely manner so that the courts are accountable to an informed citizenry.

4. Respecting the Free Flow of Information
The ability of data to flow or be accessed across borders is essential to a robust 21st century global economy. Governments should permit the transfer of data and should not inhibit access by companies or individuals to lawfully available information that is stored outside of the country. Governments should not require service providers to locate infrastructure within a country’s borders or operate locally.

5. Avoiding Conflicts Among Governments
In order to avoid conflicting laws, there should be a robust, principled, and transparent framework to govern lawful requests for data across jurisdictions, such as improved mutual legal assistance treaty — or “MLAT” — processes. Where the laws of one jurisdiction conflict with the laws of another, it is incumbent upon governments to work together to resolve the conflict.

Check out http://www.reformgovernmentsurveillance.com/ and join me!
Posted by Scott Lawrence Lawson at 7:20 AM No comments: Links to this post

Email ThisBlogThis!Share to TwitterShare to FacebookShare to Pinterest
Labels: stopthensa

Getting Prescription Lenses for Google Glass 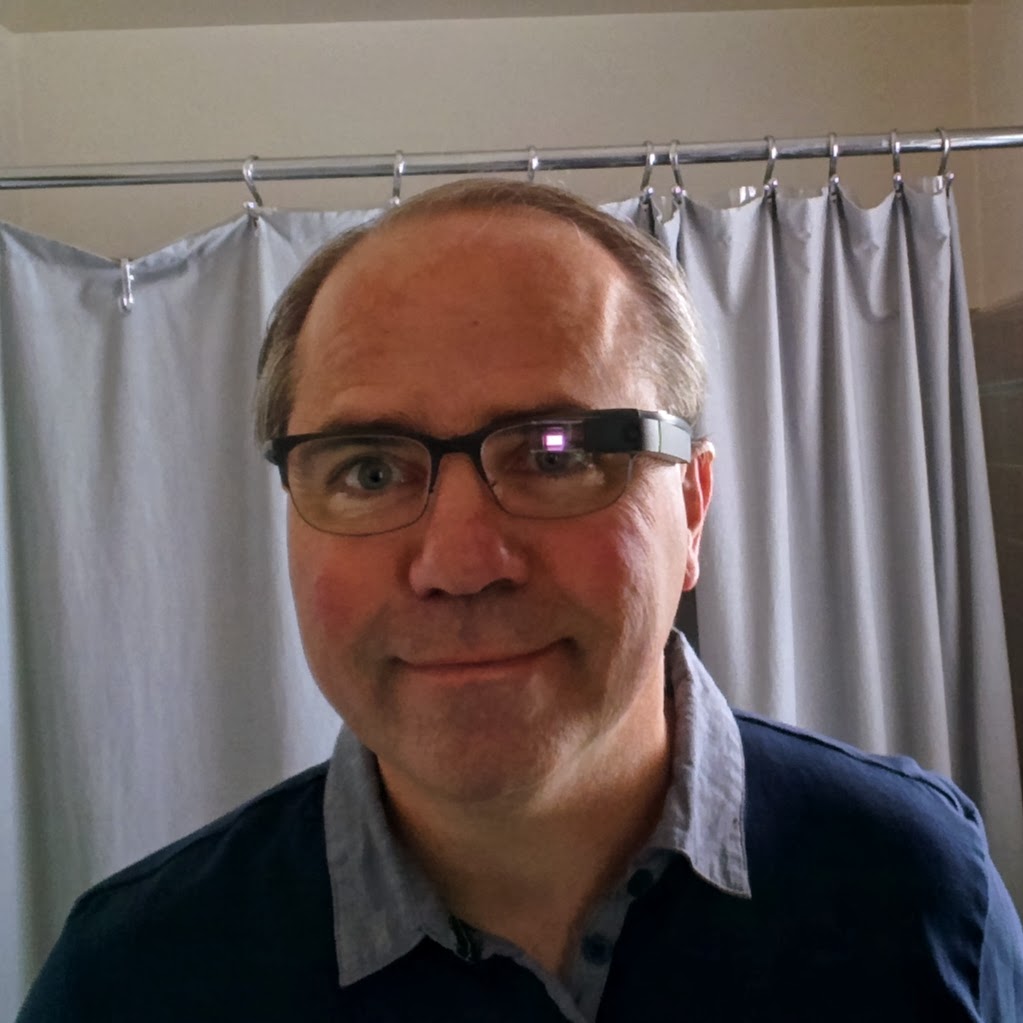 Last Tuesday, just hours after Google stocked the Glass store with the four choices of prescription frames, I ordered the "Split" style in Charcoal to match my V2 Glass I got from the swap out. Three working days (six real days) and $245.25 later ($225 + tax) I received my new frames with free shipping via UPS. The process to remove Glass (the computer) from the default band was simple with the included Torx screwdriver. The screw is attached to Glass and will not fall out. Notice that the new frames have one temple arm shorter than the other so they cannot be used without Glass attached. While simple, I doubt you'd want to switch frames to band and back again very often.

I think that Google does a great job with packaging of Glass. The case is roomy and hold the specialty screwdriver in case you need it. There are instructions for YOU and your Eye Care Provider (ECP). 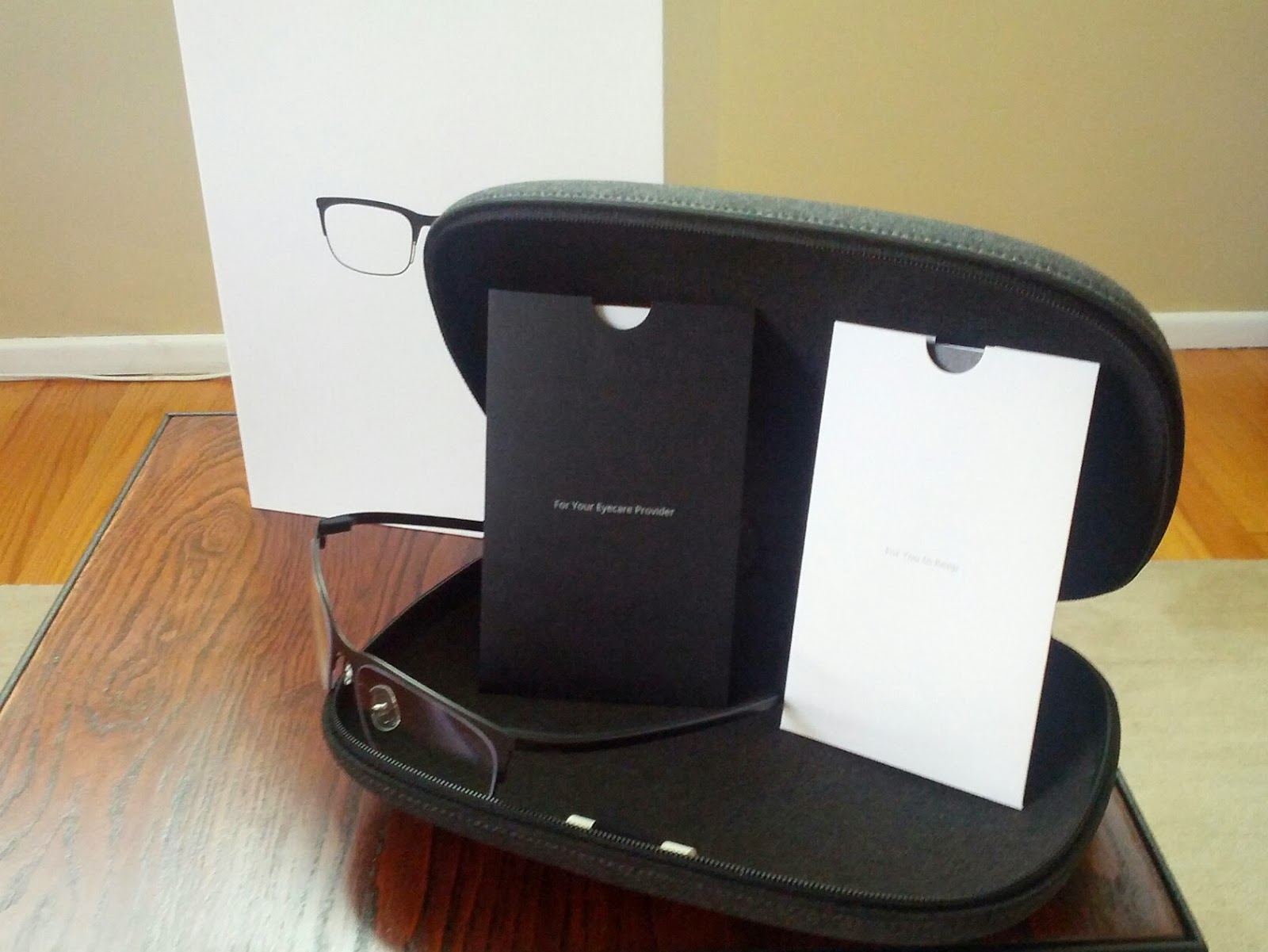 Today I had an appointment with Dr. Eric A. Bettleheim, O.D. at his Arrow Vision Center practice to get my eyes checked out and get a prescription for Glass. As a Glass "preferred" ECP he and his staff have been educated about Glass. My prescription checked out and except for not being able to see clearly without glasses, my eyes are in perfect health!

The good doctor answered my questions and expressed his professional option that using a device on a single eye only poses no known risks. The parallel he gave to prove this was the fact that people who are farsighted and nearsighted have been prescribed monovision contacts with one eye for close vision and the other for distance vision. Conclusion: Glass is safe for your eyes! 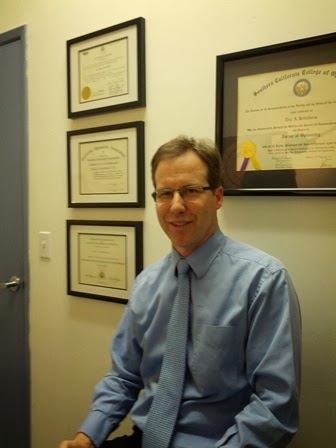 After the checkup, the doctor's assistant removed my Glass from the band and fitted it into the new frame. I helped a bit since I had done it once before. It is a bit tricky to get it on and off of the frames. A best practice to to cover the prism with a cloth to prevent any damage. She measured and checked the fit and marked on the plain lenses where the progressive lens would change from far to near. After some insurance confusion, my prescription was ordered and my Glass and band were back together. Now it is just waiting for the frames and lenses to get back from the VSP lab and I can switch my Glass to the frames for good.

For me, I believe this will be a key to allowing me to wear Glass more often and enjoying the many benefits it provides. Biking will be better without two frames on my head (and a helmet!) and I will try wearing them when I work in the garden.
Posted by Scott Lawrence Lawson at 8:39 PM No comments: Links to this post

I am a self-styled “foodie” and as such harbor an interest in all types of spices, herbs, and flavorings. The California Bay is often compared those ubiquitous leaves hidden in the dusty jar in the back of your cupboard that get pulled out Thanksgiving morning. They look similar, but are dark green a longer and narrower (lanceolate). They are aromatic like Bay Laurel, but many times more so! 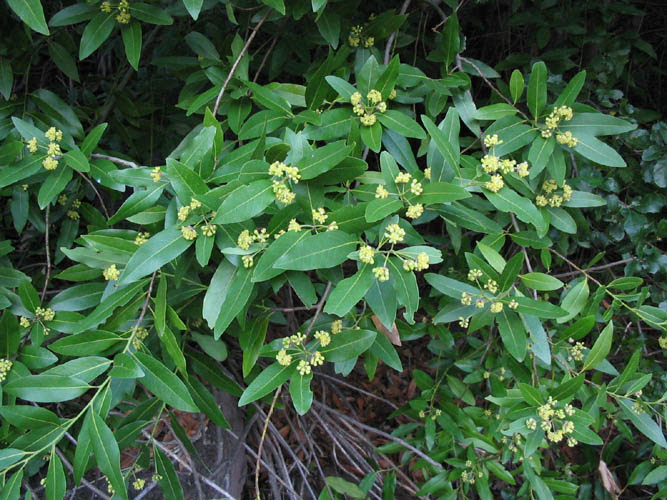 The California Bay leaves have a peppery or medicinal smell and some love that and other hate it. When touring the little kids on the “Sensational Walk” tour, I always invite them to have a sniff and while many crinkle their noses a few recall that sniff as the best part of the tour! Anyway, in reading more about this wonderful tree, which can be shrubby in drier places and reach 40-60 feet in Riparian areas, I find that besides using the leaves in cooking (only us a quarter of a small leaf in a stew), one can roast the nuts, extract oil, and carve the wood into money. Yes, back in 1933, money did grow on this tree, which is called Myrtlewood by folks in Oregon. The story is complex, so read it in full on realoregongift.com.


California Bay has a fruit that looks like a miniature avocado with one large seed with a thin seed coat. I read that you can roast the nut in the shell and eat the nut inside, and even grind the nut into a paste, add sugar and make a form of candy like “chocolate”. Maybe I’ll venture out and try that some day! However, for all the ways to use this plant, maybe the best is just to put this slow grower into a large pot on the patio and enjoy its shiny leaves, small dusty yellow flowers (umbels, which is where it gets is name), and thin shedding bark.
Posted by Scott Lawrence Lawson at 5:00 AM No comments: Links to this post